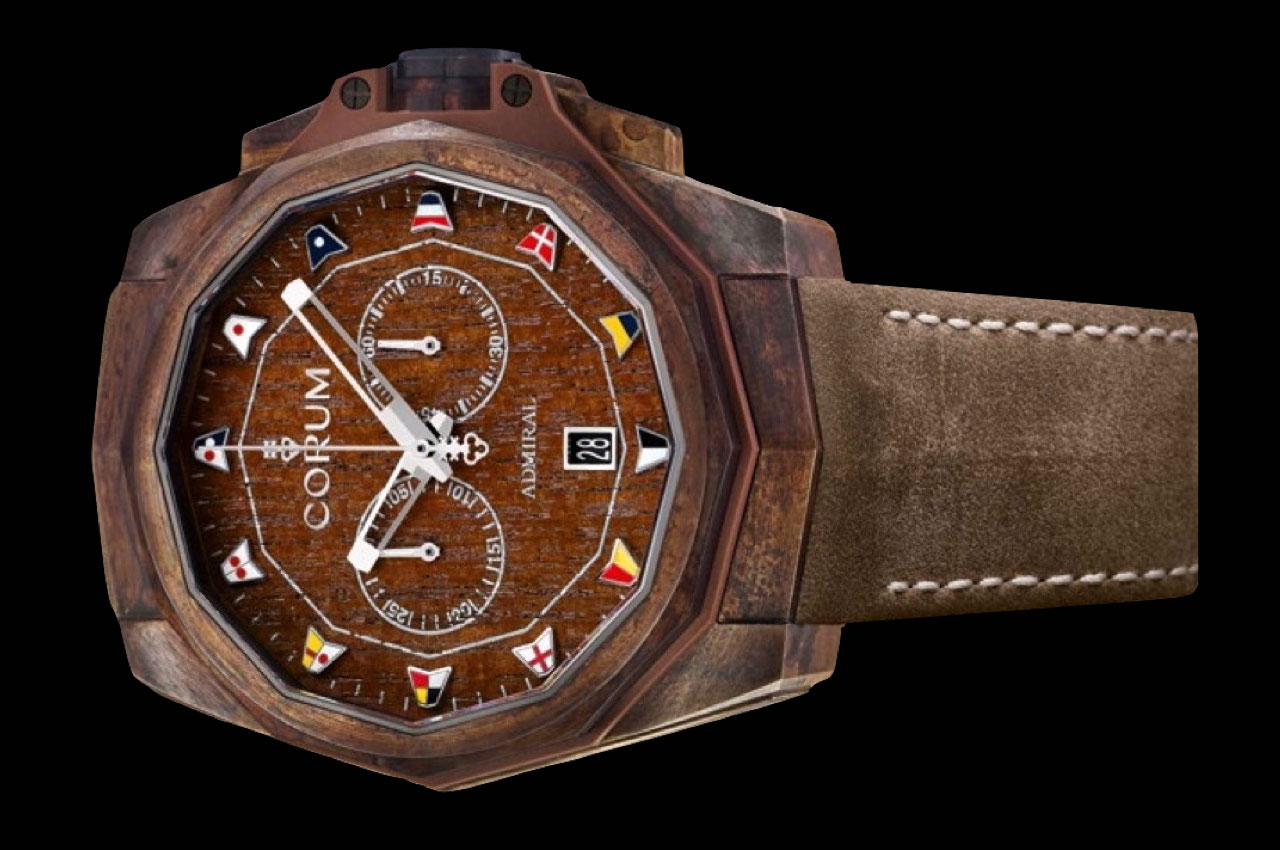 Since its introduction in 1960, the Admiral’s Cup has remained a constant presence in the Corum portfolio. Over the years it has evolved significantly from the square case it was first presented in, and today, now simplified as the Admiral collection, it has become an unmistakable piece, thanks to the twelve-sided dodecagonal profile which has been its signature for many years.

Manufactured in a striking bronze case with a dial of genuine aged teak and presented on a brown calfskin leather strap, the AC One Chronograph is a piece with strong sporty looks and a clear connection with adventure and the world of sailing, and with its distinctive and uncompromising styling, packs an enormous presence on the wrist.

At 45mm, it’s a large piece, and with the rich brown tones of its chemically patinated bronze case, resulting in a singularly unique finish which means that no two pieces are the same. the Admiral AC One Chronograph certainly cuts a purposeful and imposing figure. Straight edges and pronounced angular features give it a chunky, robust personality. The crown nestles safe from impacts in between protective shoulders, with the oblong chronograph pushers either side. Rated to 300m it is a capable go-anywhere piece equally at home being pushed to the limits at sea, or in the more relaxing environment of a quayside bistro back on dry land.

Beneath the twelve-sided sapphire crystal, with anti reflective treatment on both sides, the dial is inspired by the deck of a vintage sailboat. Made out of genuine teak, varnished, and then worked on to give it an aged, weathered appearance it really stands out, and complements the colour of the case. The hands are skeletonised stainless steel with luminous tips, and around the edge of the dial, the twelve applied hour markers, which are signatures of the Admiral collection, are nautical pennants which actually do refer to the numbers 1-12. The two subdials in white transfer display the small constant seconds at the 3 and the 30-minute chrono counter at the 9.

A sapphire exhibition caseback reveals the Corum CO 116 automatic self winding movement which beats at 28,800vph within. Its signed rotor shaped like the helm of a sailboat spinning above the movement plate finished in Cotes de Genéve decoration. It has a power reserve of 42 hours from fully wound.

The AC One Chronograph Bronze is presented on a calfskin leather strap with folding clasp and so despite the size of the watch, it remains comfortable on the wrist.