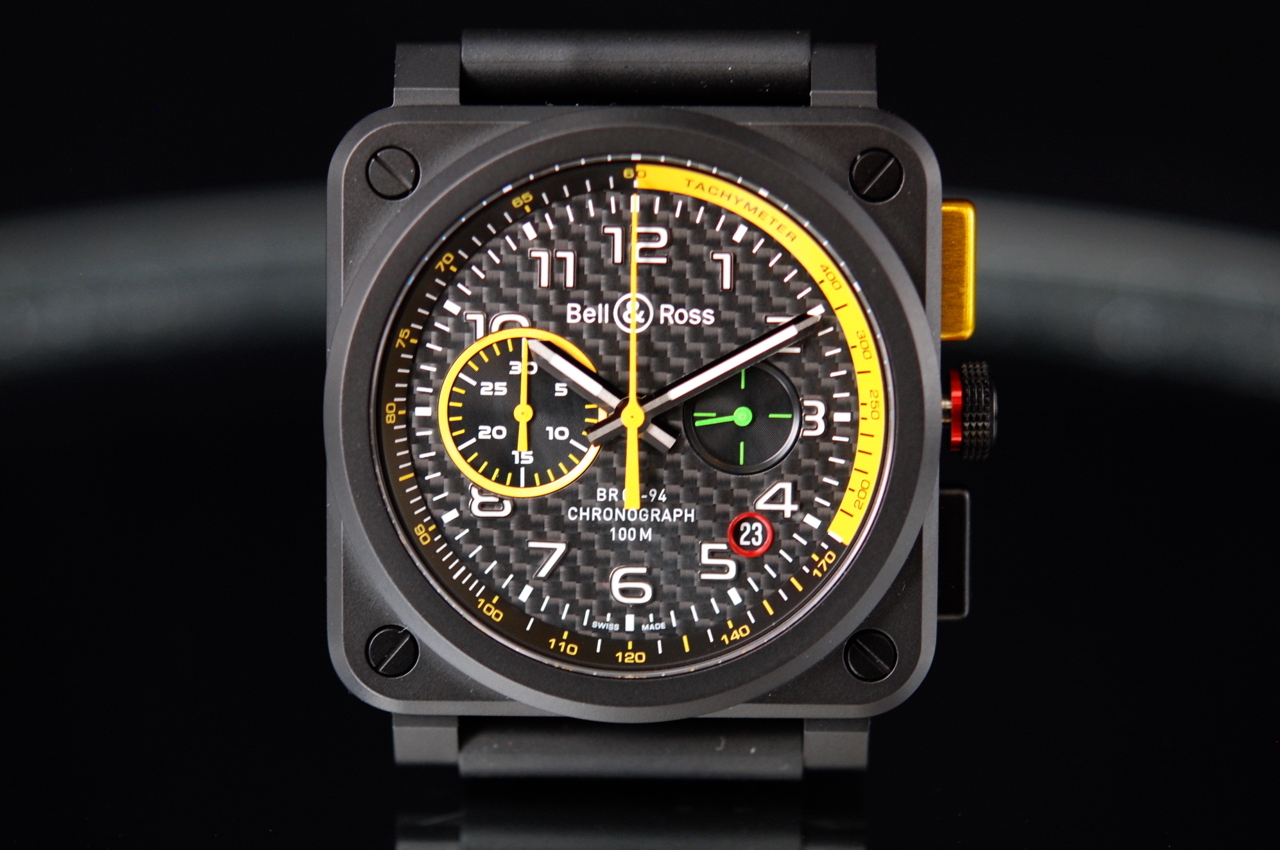 In its relatively short history, the BR 03-94 Chronograph from Bell & Ross has become one of the most recognizable designs in the watch industry. Among collectors and enthusiasts it has a cult following, thanks to its robust construction, reliability under pressure and its purposeful good looks.

As official watch partner with the Renault Sport F1 team, and its R17 racecar, Bell & Ross released this striking new version of their signature watch, using the yellow team colours and race inspired design cues in creating a very cool sports chronograph with a current and direct F1 connection.

The familiar off square case of the BR 03-94, with a large screw head each corner, is cast in micro blasted black ceramic and measures 42mm edge to edge. With squat rectangular chrono pushers and a tiny flash of anodised red at the base of the crown, it’s a prominent piece with a rugged and tastefully colourful personality.

A wide flat sapphire crystal covers a black carbon fibre dial with its distinctive weave, and the applied lume-filled numerals and hands mean its easy to read, even in low light conditions.

The dial features a small seconds subdial at the 3 o’clock position with a sweeping green hand, and opposite, the 30-minute elapsed time chrono counter has a yellow rim, which demarks all of the chronograph features, including the long central seconds pointer and tachymetre scale with the bold yellow flash which arcs round to the 20 minute mark, through to the yellow anodised aluminium start/stop chrono pusher. Just above the 4 the date has a fine red trim detail.

Inside beats the ever reliable ETA based BR.Cal.301 automatic self winding movement, and it’s enclosed with a black rear cover which seals the watch to a depth rating of 100m. It’s inscribed with the Renault Sport F1 motif.

Limited to only 500 pieces the Bell & Ross Chronograph BR 03-94 RS17 is presented on a black rubber strap with steel pin buckle.