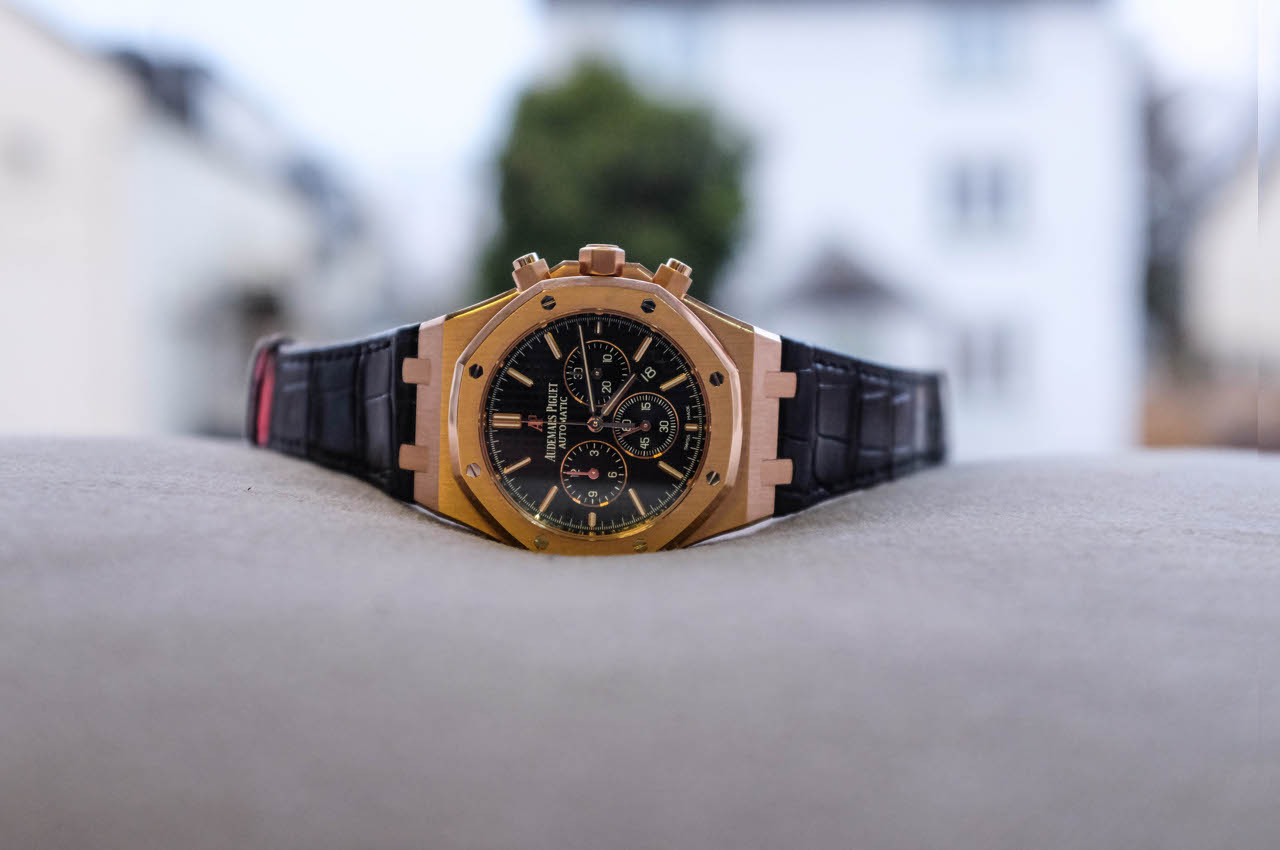 What’s to be said that hasn’t already been written a thousand times about the Audemars Piguet Royal Oak Chronograph, save to reaffirm the profound impact this watch has made in a sector it created in its near half century of production.

Acknowledged as a bone fide design icon by a design legend, since its debut in 1972 Gérald Génta’s distinctive octagonal bezel, with its eight aligned hexagonal bolt heads has set the standard for all of its competition in the luxury sports watch arena. Often imitated but never equalled, the Royal Oak is a quite simply superbly built watch, and the recognised icon for the discerning, image conscious professional with a taste for adventure.

Encased in a solid body of 18kt pink gold, the immaculate polishing of the case and bezel’s bevelled edge contrasts crisply with the uniformly directional coarse grain of the brushed upward surfaces. The hexagonal crown and chrono pusher locks perpetuate the theme which fuses pointed angles with subtle, gentle curvature; the tabs which connect to the strap are signatures of a beautiful watch with chiselled good looks.

Beneath the sapphire crystal, the black dial is pressed in the Royal Oak’s signature grande tapisserie decoration which, with its buff finished square tiles is a subtle yet powerful and enduring detail. The chronograph layout sees the 30 minutes and 12 hour elapsed time registers at the 3 and the 9, with the small constant seconds down at the 6. The white print on black of the date disc means that it’s discreet and almost hidden in its aperture between the 4 and the 5.

On the dial, applied rose gold hour indices and matching hands have a central line of Super LumiNova, and punctuate the fine white track for the minutes around the edge, segmented so the sweeping long chrono seconds hand can be stopped to read down to 1/10th of a second.

Through the rear sapphire exhibition caseback, the large balance wheel of the  self-winding Manufacture Calibre 2385 keeps a constant beat of 21,600 vph, and its bridges and plates are finished with Côtes de Genève decoration. The large monoblock oscillating mass is 22Kt gold and engraved with the founder’s family crests either side of the AP motif.

Presented on a black croco leather strap with folding 18Kt rose gold clasp, the Audemars Piguet Royal Oak Chronograph is an exceptional watch which is never out of place in the boardroom or the marina side bistro.