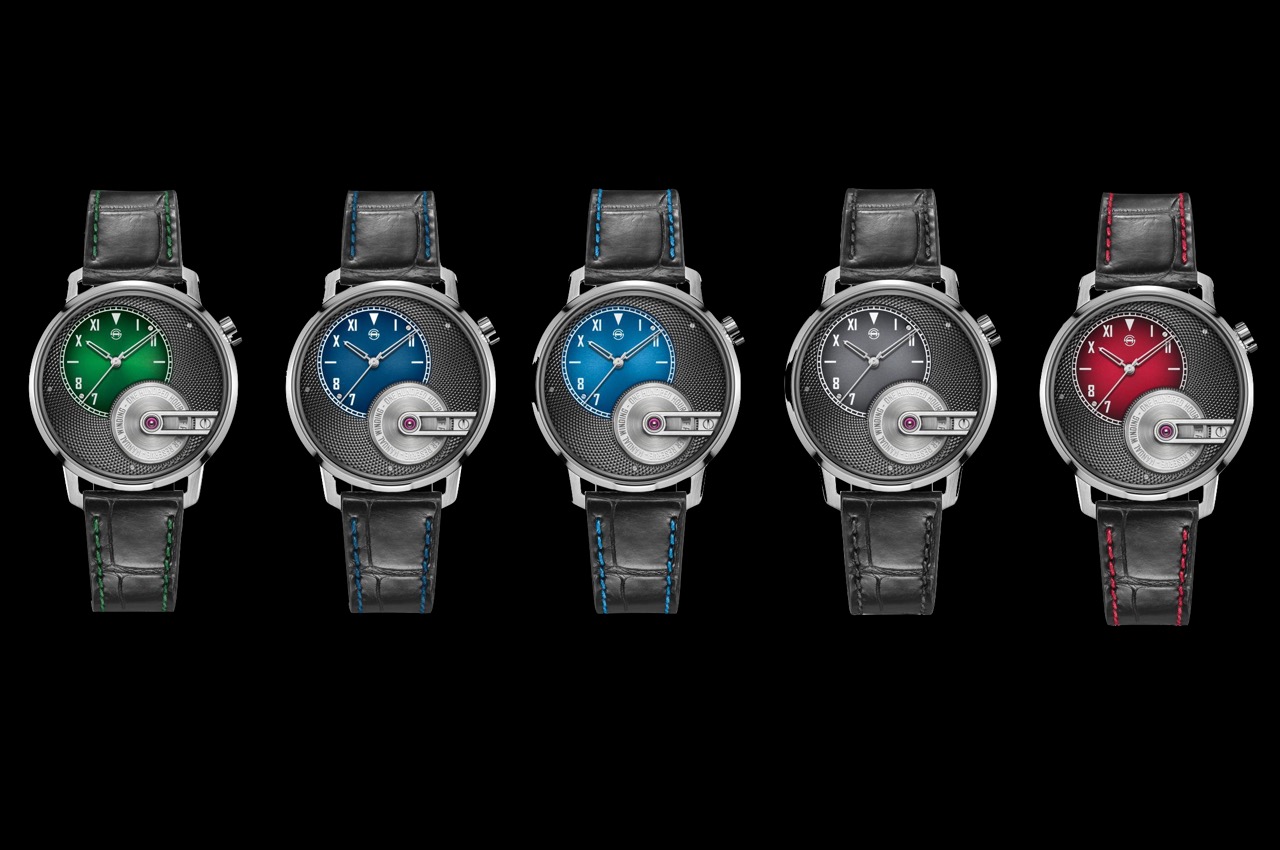 With its striking combination of a California style numeral arrangement, rich burgundy fumé dial and the added prestige of a hand guilloché plate crafted by Kari Voutlianen’s  Comblémine atelier,  the Armin Strom Tribute 1 California Burgundy is an exceptional and unique edition. While the piece exhibits contemporary dress watch aesthetics and artisan craftsmanship, it also demonstrates the superb mechanical complexity for which this independent Swiss watch brand, Armin Strom are renowned throughout the world.

The piece is presented in a round stainless steel case, with the crown positioned at the 2 o’clock. At 38mm diameter, and resting just over 9mm tall on the wrist, its profile recalls the mid to late twentieth century taste for less overtly proportioned wristwatches.

Characterised by clean lines, the case has a polished bezel and angles, with a contrasting brushed waist and squared lugs. Demanding of closer inspection, every nuance of its profile has been given careful consideration, and the finishing is immaculate.

Beneath a gently domed sapphire crystal, the hours and minutes are displayed on a decentralised dial with a gradient burgundy fumé finish. The ‘California’ arrangement of the numerals, with Roman on the upper, dial and Arabic on the lower, is a distinctive layout which gives the piece a retro feel. Together with the traditional railtrack on the perimeter of the dial, the numerals and indices  have been executed in white, offering a superb contrast to the radiant degradé of the fumé.  The open-worked hour and minute hands and the seconds hand which have been crafted and finished in the Armin Strom workshops, give added refinement to this remarkable dial.

Interlocking with the hour and minutes dial, the signature dial side barrel cover, which is becoming a synonymous feature with Armin Strom timepieces, is held by a single skeletonised bridge. Enhanced by hand-finishing, the perimeter of the cover also features a relief engraving which pronounces the generous power reserve of the watch.

A black guilloché plate surrounds the dial and barrel cover, providing a stunning, mesmerising background. Crafted by the acclaimed Finnish watchmaker, Kari Voutilanen in his Comblémine atelier, the intricacy of its repeating pattern, achieved using time-honoured methods, is instantly absorbing and it elevates the individuality of this special edition.

On the underside, a sapphire crystal caseback reveals the superb Calibre AMW21 manual winding movement which has been conceived, designed and developed in the Armin Strom Biel/Bienne ateliers, exclusively for the Tribute 1 collection. Beating at 3.5hz (25,200 vib/h), the in-house movement boasts an impressive 100 hours of autonomy, which is achieved in part thanks to the innovative motor barrel, which dissipates its energy with optimal efficiency. The balance and escapement assemblage are visible, while a three quarter plate features broad Côtes de Genève stripes and mirror polished anglage around the edges.

A fine example of contemporary Haute Horlogerie with an artisan twist, the Armin Strom Tribute 1 California Burgundy edition highlights the technical merits and design prowess of this Swiss Independent watchmaking company. Presented on a black alligator leather strap with burgundy stitching, the model will be a limited release of five pieces, assuring exclusivity to its wearer.