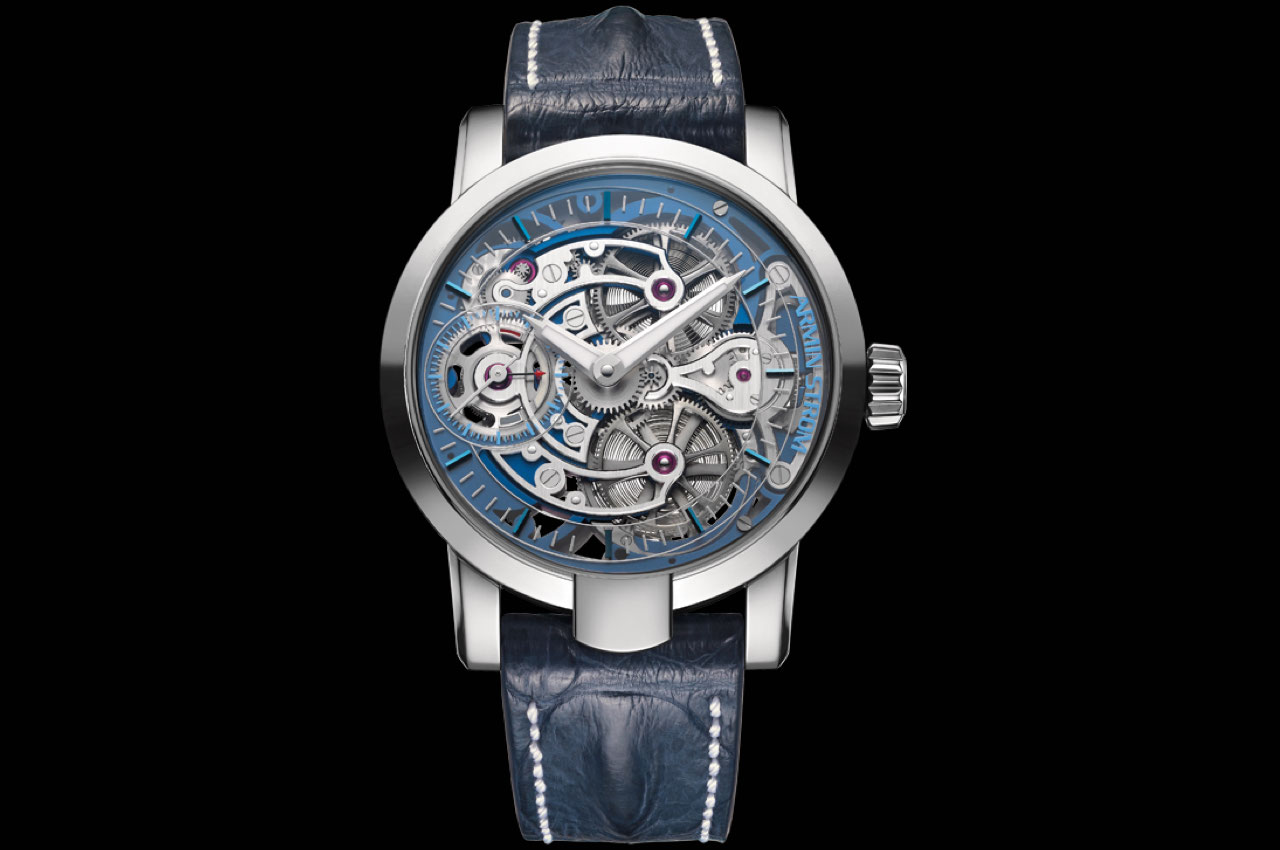 Established in 1967 by master engraver and watch restorer Armin Strom, his eponymous brand has certainly come a long way from the relatively modest beginnings of the backroom workshop, behind his shop in Burgdorf, where his talent and demand for his unique craftsmanship eventually led on to the creation of his first watch in 1981, and the founding of his own watch brand.

From where its operations are based today, in its modern atelier in Biel/Bienne, over the past ten years the Armin Strom manufacture has progressively been making its presence felt in the world of high-end independent watchmaking, as a manufacture watchmaker of complications in its own right, and defined by the tab at six o’clock its watches are recognised as much for their quality as for their distinctive appearance.

Infused with its theme of electric blue, the Skeleton Pure Water by independent watchmaking company Armin Strom is a stunning piece which showcases modern high-end watchmaking with cool, contemporary styling in a display which is utterly mesmerising to behold. It’s encased in stainless steel with polished surfaces, and featuring fluted screw-in crown as well as the brand’s signature tab at the six o’clock position, which can be engraved to further personalise the watch.

Beneath the gently domed sapphire crystal, the Skeleton Pure Water is a spectacle of bare metal and clear glass layers, as the dial ring is also manufactured in sapphire, which reveals the fully exposed mechanism, and offers a fascinating look at the skeletonised in-house manufacture movement, which features a stripped back blue mainplate. Complemented by the glass case back any ambient light reaches into almost every nook and cranny of the movement, and the detail of every component is visible. From the spokes of the two open barrels, through which the fine coiled mainsprings can be seen, through the gear train, wheels and cogs, the dial is complex, technical and three dimensional.

Even considering the openworked dial, the time is still easy to read, as against the offset sapphire dial ring, with applied blued hour markers, the hours and minutes hands in stainless steel are generously coated in Super LumiNova luminous material, and the small seconds are positioned at the nine o’clock position, where a discreet red-tipped power reserve indicator is also integrated.

The Skeleton Pure Water is powered by Armin Strom’s ARM09-S in-house manufacture movement, and via the energy stored in its double barrels, it is good for an impressive eight days of power reserve, beating at a leisurely 18’000 vph.

The Armin Strom Skeleton Pure Water is presented on a blue alligator leather strap with white stitching and folding clasp.