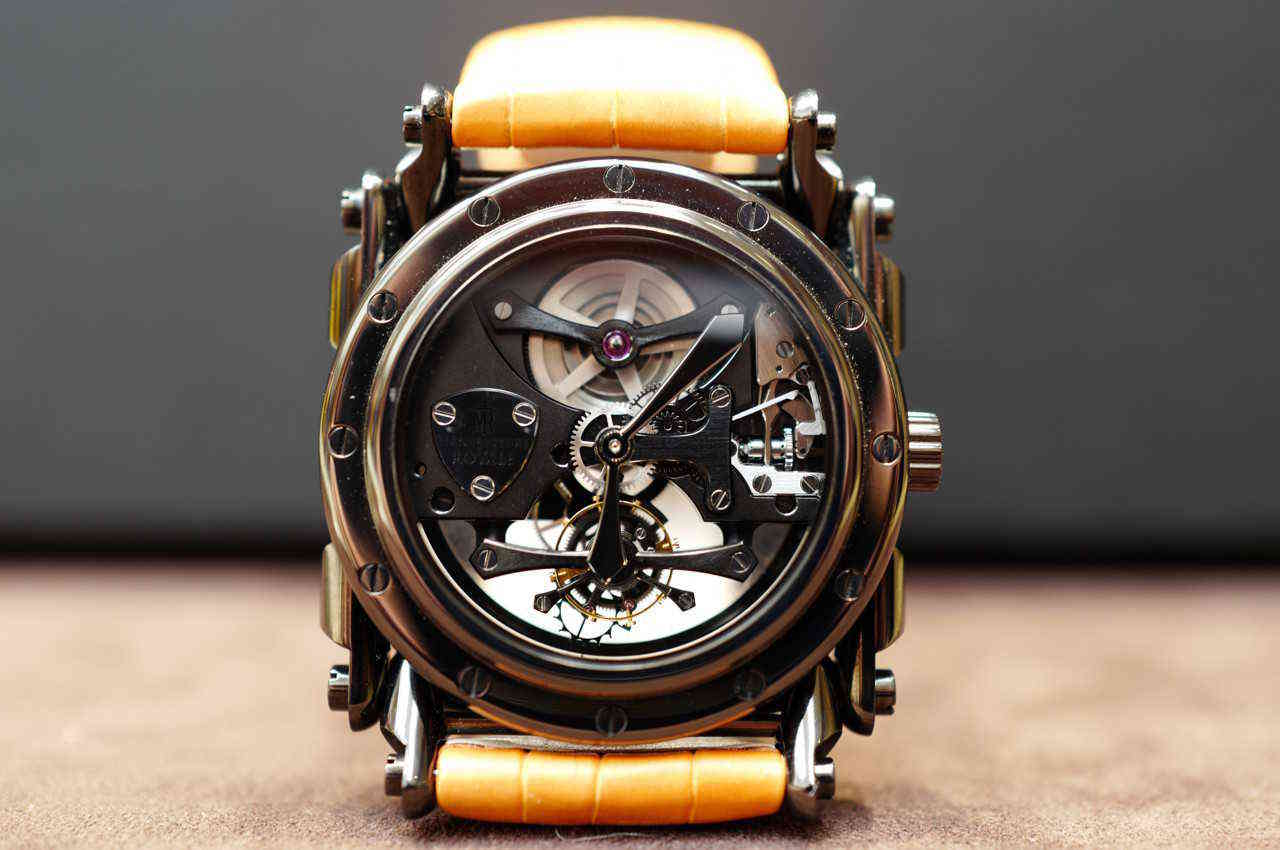 A 2010 revival has breathed new life into this prestigious marque, engendering an exclusive collection aimed specifically at connoisseurs of fine watchmaking.

The Manufacture Royale Androgyne Tourbillon is a visually stunning wristwatch.

At a glance one becomes instantly aware of the uniqueness of its 43mm case which on its own comprises of 52 separate components.  Here, a rounded bezel studded with visible screws, rests atop a square case.  The lugs, which are also characterised by visible screws, are no less impressive.  They have been engineered to articulate smoothly to accommodate the wrist.  A full black PVD coating does nothing to diminish the impressive profile of this extraordinary case, instead it adds to the impact of its bold styling.

Although there is a contemporary, minimalist feel to this Androgyne Tourbillon model, its Haute Horologie credentials are unmistakeable.

Bereft of a dial, the open worked movement is revealed allowing for full appreciation of the hand finished and sand blasted bridges. The exposed mainplate and barrel at 12 o’clock offer a superb aspect, however it is the illusionary aspect of the tourbillon at 6 o’clock which dominates.  Sandwiched between front and rear sapphire glass it appears to elevate, showcasing vivid flashes of its silicon escape wheel and lever.

The distinctive profile of the sword-shaped bridges of the tourbillon and of the mainspring and barrel is reflected in the outline of the hour and minute hands adding conformity and, at the 9 o’clock location, a shield bears the Manufacture Royale marque.

Turn the piece over and a new panorama is revealed.  The mainplate of the in-house mechanical hand-wound Calibre MR02 has been meticulously decorated with Cotes de Genève while cutaway sections give a superb reverse glimpse of its components.

The Manufacture Royale Androgyne Tourbillon is a watch which demands attention.  While it remains firmly in the genre of high-end fine watchmaking, its modern aesthetics and ingenious features add a contemporary twist, making it a truly unique timepiece.

At The Limited Edition we are pleased to offer this spectacular piece, brand new and unworn in box, and complete with full manufacturer’s warranty.