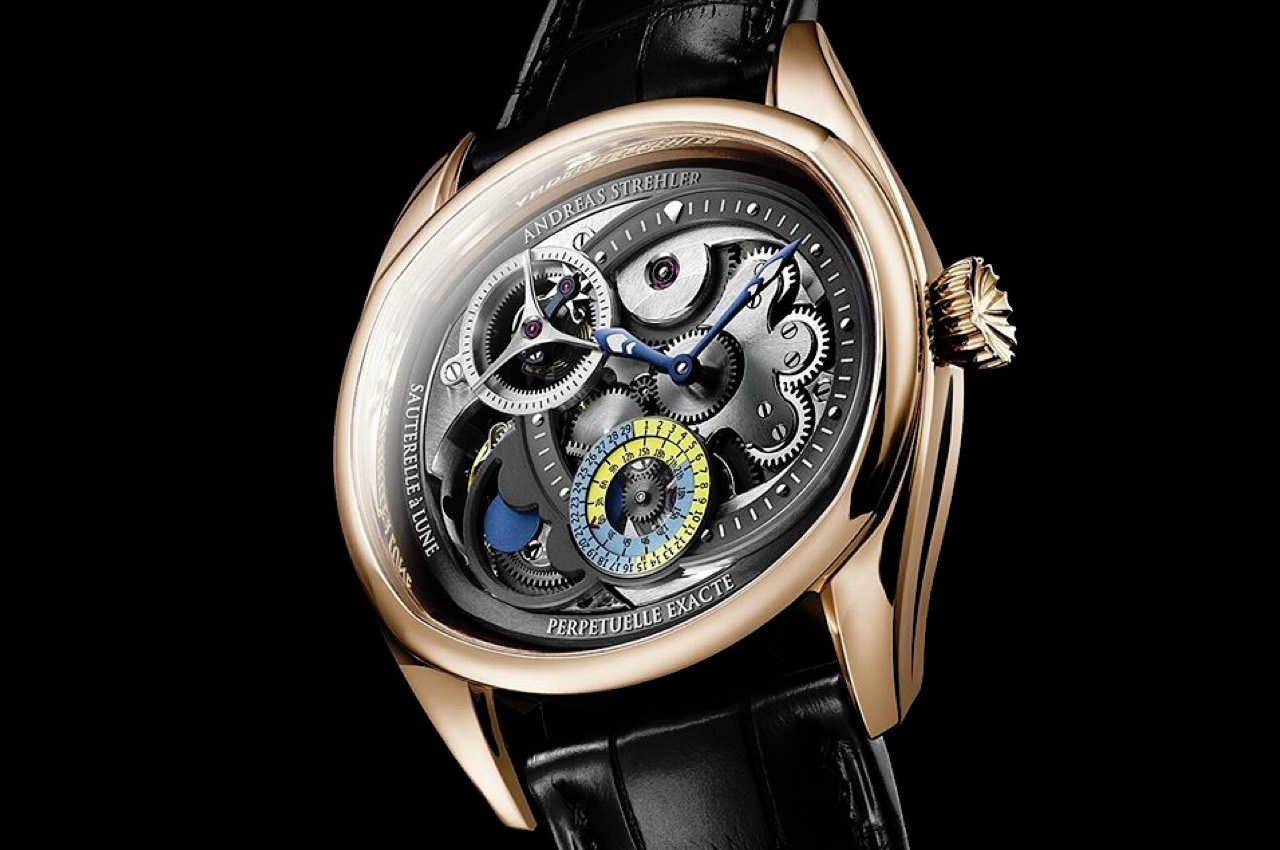 The Lune Exacte from Master Watchmaker Andreas Strehler is an exceptional piece of horological innovation, and mechanical ingenuity of bewildering complexity which has resulted in the world’s most accurate moon phase watch, beautifully encased in a setting of luxurious platinum and hand skeletonised components.

A distinctive case design is much more difficult to pull off successfully than might be imagined yet, in the lustrous gleam of 950 platinum, a signature trait of Andreas Strehler for his own pieces has been its gracefully flowing contours, with a fabulous ellipsoidal face of sapphire crystal giving an almost widescreen view of the dial and the incredible mechanical array beneath.

Given its full title, the Sauterelle à Lune Perpetuelle Exacte not only indicates the point of the phase on a given day, but also fine tunes the moon’s position throughout each day of its 29.53 day cycle. Regardless of the accuracy of a manufacturer’s moon phase mechanism, traditional displays rarely let the wearer know with any real precision where the moon is in relation to its monthly cycle, or how many days in since the new moon. For Andreas Strehler such imprecision threw down a new challenge, and having already created a Guinness World Record-setting moon phase calibre boasting an accuracy that, assuming constant uninterrupted running, required manual adjustment once in over two million years, he set about remedying the problem by further refining his record holding movement to display clearly the days of the moon phase, and even better, the stages of the moon within each day in three-hour segments so the moon can be set to its position relative to location.

The dial is almost fully open worked, and lume-filled blued steel hands indicate hours and minutes off centre. The seconds are represented via the spiky wheel of the superb remontoir d’égalité and the pointer jumps in dead beat increments. Below, the dark blue moon is cut away to expose the balance and escapement, and on its unusual subdial near the bottom the finer details of the moon’s passage are displayed, with the breathtaking mechanicals it requires providing a stunning backdrop to the time functions.

Magnificent through the transparent exhibition caseback, the movement is wholly designed and conceived by Andreas Strehler, and it is in the intricacies of the mechanical masterpiece where his talents are most evident. Apart from the rubies, each one of the 184 individual components, including the conical winding gear, double spring barrels, remontoir, balance and escapement are manufactured in-house.

As exquisitely beautiful as it is a feat of micro engineering the Andreas Strehler Lune Exacte marks another step into this watchmaker’s world of possibility by a true master of his profession.